Some people see a cross but I see a kite tethered to the ground by two stars that belong to a different constellation. From the end of light to a bright new day, it moves up and down. It can dip low on the horizon but it always rises up again just like a kite flown over the earth.

But its journey is our journey as it is actually our world turning that makes it appear to move across the night sky. We make patterns out of the stars based on two things; our position as an observer and our constructed reality or story that we attach to what we see. We live in an objective universe but we perceive that universe through our own stories. We live in a ‘Storyverse’. The best way to move into that Storyverse is to look at it from the outside and the inside. My book ‘Into the Storyverse’ tells a story about someone’s struggle, through traditional narrative and verse.

We see a story from the outside and the inside. We see outside to the stars and inside to the observer. I have no intention to change what anyone sees. The Southern Cross will always be the Southern Cross for it exists in the stories that have accumulated over the years until it seems that they are just objective reality, fixed in the sky. But most of the stars in the sky are great distances from each other and the pattern we see is totally dependent on our position in the Storyverse. ‘Into the Storyverse’ will be published later this year. Till then take some time to avoid over exposure to dreadful pandemic stories and be still under the cool night sky.

There are other stories out there waiting to be seen and heard. Watch this space.

We are all storytellers, gathered around the … END_OF_DOCUMENT_TOKEN_TO_BE_REPLACED 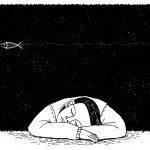 Into the Storyverse can be purchased as an Audio … END_OF_DOCUMENT_TOKEN_TO_BE_REPLACED